Parallel to the ESPGHAN 2019 congress held on June 5-8th in Glasgow (UK), more than 170 pediatricians from 25 countries gathered on June 6th for our Novalac symposium. During this event, Prof. Silvia Salvatore from the department of Pediatrics (University of Insubria, Varese, Italy), delivered a presentation related to the management of functional gastrointestinal disorders (FGIDs) in infants. 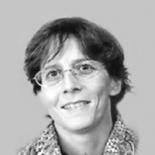 "Why do we have so many FGIDs in infants?

As demonstrated in the biopsychosocial model, many factors can interfere with baby wellness. Functional gastrointestinal disorders (FGIDs) result from the complex interaction between biological and psychosocial factors. They come from genetics in addition to environmental factors such as early life events (antibiotic use, infection, inflammation, allergies, etc.), family coping style, family stress… Knowing these factors will help managing these FGIDs.”

Prof. Silvia Salvatore from the department of Pediatrics (University of Insubria, Varese, Italy)

In the past decade, new insights have been gained about the different functional gastrointestinal disorders (FGIDs) in infants and toddlers. New Rome IV diagnostic criteria of FGIDs have been defined by a scientific expert committee in 20161. 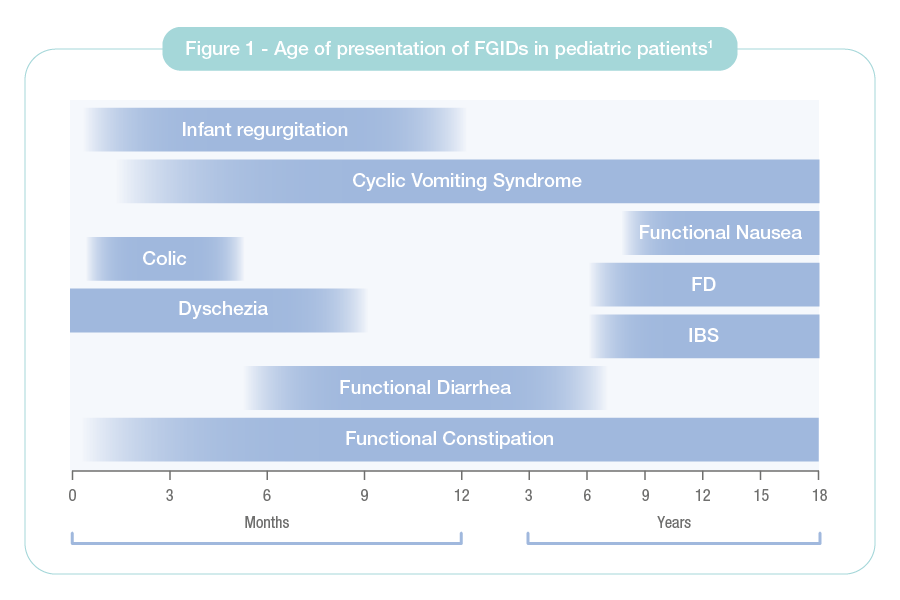 The bars show each diagnosis. Symptoms might begin earlier, as there is a time requirement to fulfill diagnostic criteria. IBS, irritable bowel syndrome; FD, functional dyspepsia.

About 30-50% of infants present with symptoms of FGIDs during the first 12 months of life.

These FGID symptoms can have important consequences on the families and the society. They vary from mild to extremely distressing for the infant and parents and may lead to a cascade of infant discomfort and crying, parental anxiety, poor quality of life, short- and long-term health consequences, shortened duration of full breastfeeding, frequent formula changes and medical consultations, overuse of drugs and high associated healthcare costs2–9. FGIDs result from complex interactions between biological, psychological, and social factors.

Scientific and medical experts have developed and discussed practical recommendations and algorithms to manage FGIDs4,7. The most relevant recommendations for the pragmatic management of FGIDs can be summarized as follows:

1. Observation for any alarm signs

The first step in the management of FGIDs is to make sure the symptoms are functional. Thus, any abnormal signs should be excluded when reviewing the history of symptoms and onset of FGIDs, when evaluating the meal, parents’ interaction, performed tests, when assessing growth and development, and during physical examination.

Parental education and reassurance is recommended as the first line of management of FGIDs7:

2.1 Breast milk for FGIDs: the best functional and personalized food

Breastfeeding should be recommended and supported, even when infants display persistent and severe FGIDs. Breast milk is a perfect orchestra for micro/macro nutrients and for immune properties (Figure 2). 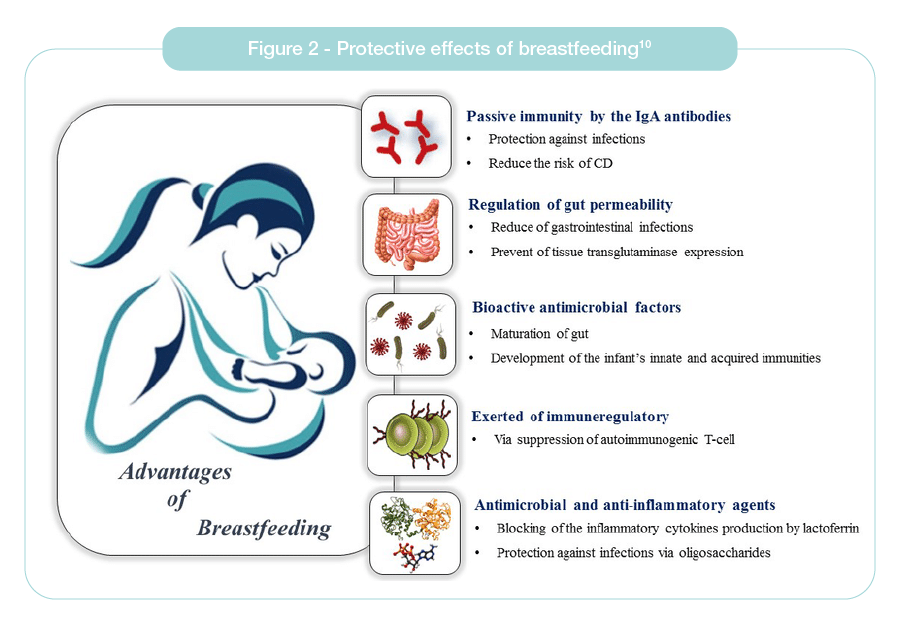 2.2 Special milk formulas in FGIDs, for whom?

In non-breastfed infants, special milk formulas may be considered in case of FGIDs.

Each infant is unique, but each infant formula is unique, too. Thus, infant formula that shows clinical benefits should be chosen. Special milk formulas are specific for infants with a particular gastrointestinal symptom. Key nutrients in special milk formula include protein, fat, carbohydrates, prebiotics and probiotics, and have different properties of interest for specific situations.

The role of proteins in the management of FGIDs

The nature of proteins (casein or whey) and their degree of hydrolysis (native, partial or extensive) will differently impact gastric emptying. Whey proteins are emptied faster than caseins, thus those last ones are better to improve satiety.

Thickened formulas for infants with regurgitation

A commercial thickened formula has the advantage to be homogeneous, to have a nutritionally balanced composition, and a higher viscosity in the stomach, but it is more expensive and there might be a risk of over use. In contrast, a “home-brew” thickened formula is cheaper and easy to prepare, but there is a higher sucking effort for the infant, a delayed gastric emptying, an inconsistency in composition and it has a too high viscosity and many calories.

For some babies with persistent symptoms or regurgitating while breastfed, the thickening agent alginate has been recently shown to significantly decrease the number and extension of both acid and non-acid reflux episodes and associated symptoms in infants with suspected GER-disease17.

How to manage infant colic?

Infant colic results from normal developmental process. It is described as a behavioral syndrome in infants younger than 5 months old involving long periods of crying and hard-to-soothe behavior1.

Parental reassurance is used as the first line of management of infant colic1. There is no evidence that pharmacologic intervention are useful. Some studies suggest that particular probiotic supplements are effective for breastfed infants with colic but there are insufficient data to make conclusions for formula-fed infants with colic18.

3. Management of FGIDs: conversion of a vicious cycle to a virtuous cycle

By providing complete and updated parental education, reassurance and nutritional advice, healthcare professionals can help to disrupt this cascade and optimize the management of FGIDs and related symptoms by reducing infants’ distress, alleviating parental anxiety and improving the quality of life for the family while protecting healthcare budgets (Figure 3)7. 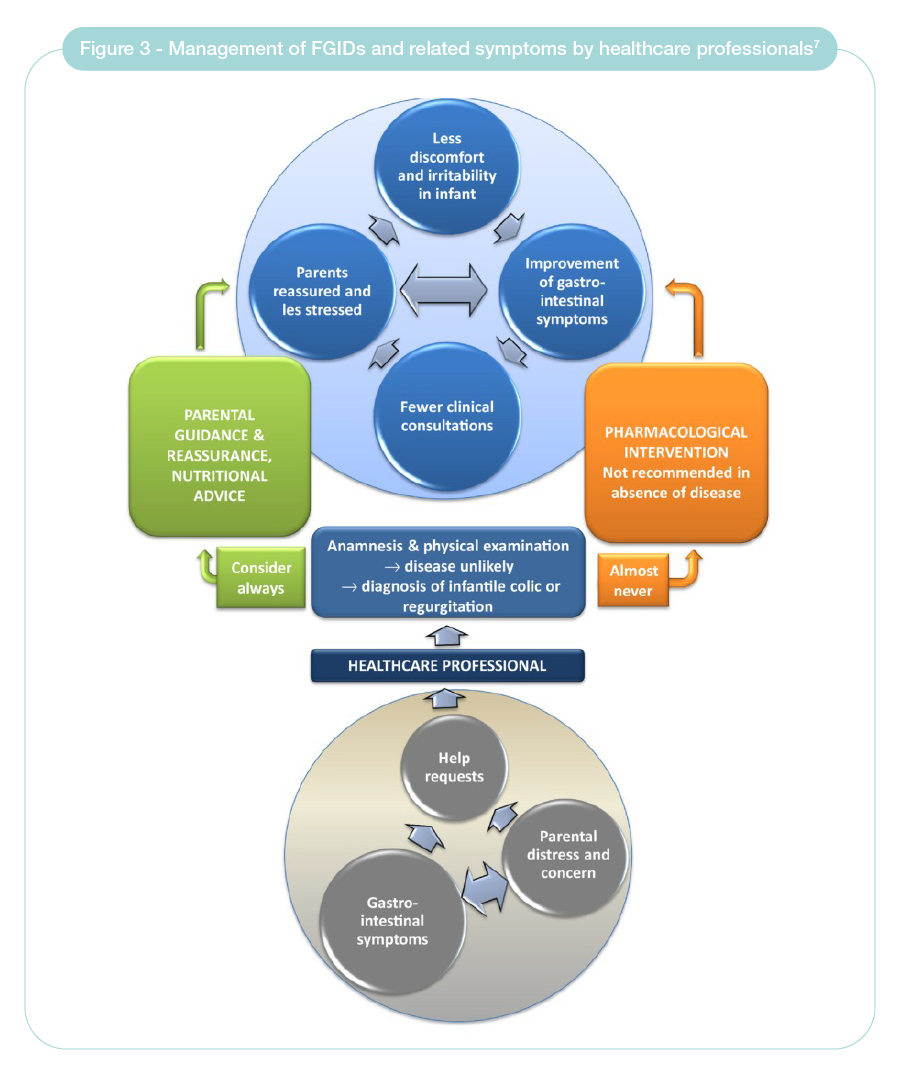